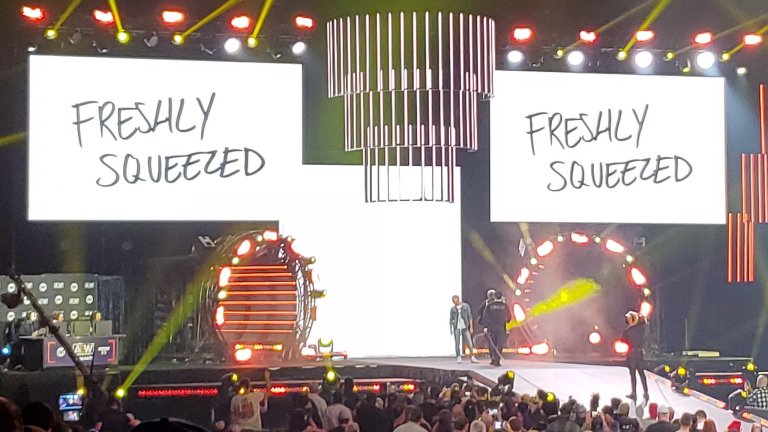 Orange Cassidy at the December 1, 2021 taping of AEW Dynamite at Gas South Arena in Duluth, Georgia. Photo by JJonahJackalope (CC 4.0).

For years, All Elite Wrestling and New Japan Pro-Wrestling fans have clamored for a cross-promotional event featuring the very best from each company competing against each other. This Sunday, that pipedream will finally become a reality in the form of Forbidden Door.

Both top titles will be up for grabs as Jon Moxley fights Hiroshi Tanahashi to determine the interim AEW World champion and Jay White defends the IWGP World Heavyweight Championship in a star-studded four-way match.

Ahead of the anticipated event, let’s take a look at the favorites that are expected to emerge victorious in the night’s biggest bouts, according to our own betting odds and analysis.

It was only a few short weeks ago that AEW introduced the All-Atlantic Championship, which will largely be fought for by AEW’s international talent. Of the four wrestlers who have qualified for Sunday’s championship clash, Miro makes the most sense to be crowned the inaugural champ.

Pac, Malakai Black and Tomohiro Ishii all have a chance to come out on top and would been fine choices, but Miro should be considered the odds-on favorite. He thrived during his last reign as AEW TNT champion and would bring the most amount of importance to the title straight from the get-go.

Although AEW’s women’s division hasn’t received a ton of focus since Thunder Rosa became champion in March, she’s still the best possible person to be at the helm right now. Toni Storm is a star in every sense and should hold the gold someday, but it’s too early in Rosa’s reign for her to be dropping it, hence why the odds favor Rosa.

Orange Cassidy wasn’t the first name many fans had in mind as far as who Will Osprey’s opponent should be for this show, but they’re bound to have an entertaining affair, nonetheless.

That said, Cassidy has no business winning the IWGP U.S. title and it would be a cardinal sin for him to beat one of the best in the world in Ospreay, so a successful title retention for Ospreay is virtually guaranteed.

The build to this bout has left a lot to be desired, but the four-way itself is bound to be a barn burner. All of these men are tremendous athletes and fans can expect excellence from this outing, but the outcome only really comes down to two people: Jay White and Kazuchika Okada.

White regained the gold from Okada earlier this month, and while AEW doesn’t typically do short title reigns, it’s possible it was done so Okada can get the belt back to a big reaction at the event. That’s a likely scenario, but White finding a way to retain is the route to take.

Current-reigning AEW World champion CM Punk will be out injured for the foreseeable future and thus an interim champ will take his place until he returns.

Between Jon Moxley and Hiroshi Tanahashi, Tanahashi capturing the title is a far more exciting prospect. He can mix it up with a variety of fresh faces and even defend it over in Japan on occasion.

The issue is that he isn’t expected to be sticking around for AEW long-term, and the champion needs to be featured almost every week. That effectively rules out the idea of a Tanahashi victory and makes Moxley the favorite by a landslide.