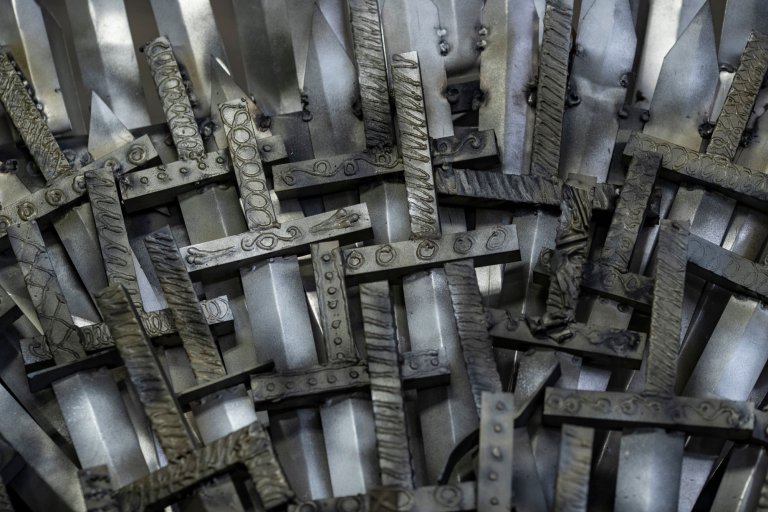 A full-size replica of the Iron Throne on the Game of Thrones HBO series was made by students at the Knight School of Welding on 39th Street in Louisville. April 19, 2019

House of the Dragon will premiere on HBO on August 21st
The 10-episode season will serve as a prequel to Game of Thrones
Who do the odds favor ending Season 1 sitting on the Iron Throne?

After over three years, Game of Thrones fans will have more exciting content to sink their teeth into when House of the Dragon premieres Sunday, August 21st and will serve as a prequel to the critically-acclaimed series that ran from 2011 to 2019.

Fans of the franchise have instilled quite a bit of faith in the genius behind it all, George R.R. Martin, to right the wrongs of the poorly-received final season. As noted, House of the Dragon will precede everything that transpired in Game of Thrones, but fans are hopeful that the first season of this series will end on a much more satisfying note.

That includes the ever-asked question of who will ultimately occupy the Iron Throne once the season concludes, along with any potential unexpected appearances from familiar faces in the first episode. These are viewers’ best bets for both.

House of the Dragon Odds: Who Will End Season 1 Sitting on the Iron Throne?

Played by Tom Glynn Carney, Aegon Targarygen looks to have a better chance than anyone at coming out on top in the battle for the Iron Throne. He’s the oldest son of Alicent Hightower (more on her momentarily) and is already expected to fight Princess Rhaenyra for it.

All signs point to Rhaenyra being the heavy favorite to take the throne at the start of the show, but with the competition being so strong, that isn’t likely to last, especially over the course of 10 episodes. Also note that she’s the oldest half-sister of Aegon, so their battle will be both brutal and person.

Trailing a bit farther in the odds is Prince Daemon at +300. He’s an incredibly crucial character in some of Martin’s written works and is among the elite villains from that time frame, nicknamed The Rogue Price.

He isn’t one to be underestimated, so he certainly has a decent chance of absconding the Iron Throne when all is said and done. Alicent and Otto Hightower and Corlys Valeryon are all candidates as well though not nearly as strong given their status on the show from what we know so far.

Until the first episode airs, viewers don’t know for sure whether Night King will be alive during the period that House of Dragon takes place. There hasn’t been any confirmation on their status, though despite both Night King and the White Walkers being odds-on favorites to appear, they aren’t looking too likely to appear.

The leading theory among fans is that they’re in a rebuilding phase at the time House of Dragon takes place, meaning they won’t be pertinent to the plot at all. That makes a dragon cameo the next best bet at -175, especially since there is confirmed to be 17 of them throughout this first season.

Each dragon is unique from the rest, and with so many of them being featured, it’s all but a guarantee that one will appear in the premiere episode.

The entire series will deal with who will take the Iron Throne after King Viserys Targaryen, who inherited it from his grandfather King Jaehaerys. He will play an important role throughout the series and seems like the most obvious choice to appear, so even at +135, he’s a safe choice to put money on as well. The fact it’s a bit too obvious is why there’s no real risk there.

House of the Dragon finally arrives on HBO this Sunday, August 21st.