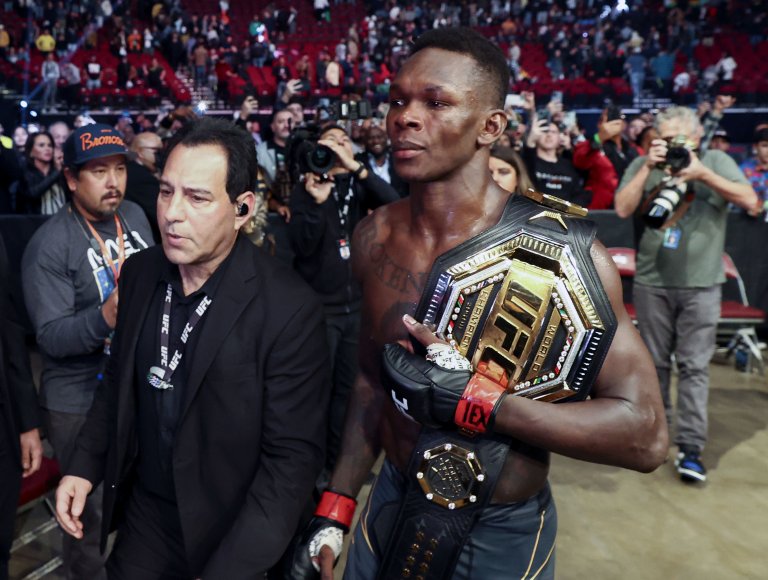 International Fight Week is back as a stacked UFC 276 card goes down on July 2
Two titles are on the line
See the UFC 276 odds below, along with our UFC picks and parlays for the main card

The UFC heads to the T-Mobile Arena in Las Vegas, Nevada for a stacked UFC 276 card that goes down on Saturday, July 2. In the main event, middleweight champion Israel Adesanya looks to defend his middleweight title against Jared Cannonier. Alexander Volkanovski and Max Holloway have their trilogy match for the featherweight title in the co-main event.

The UFC 276 main card airs live on pay-per-view at 10:00 pm ET. The table below shows UFC 276 odds for the main card at Barstool Sportsbook followed by our UFC free picks and parlays.

*All odds taken June 28. Check out this Barstool Sportsbook promo code for the UFC this weekend

Israel Adesanya isn’t a fan of people thinking he is a boring fighter after his past two performances and he says he plans to make a statement in this fight. Jared Cannonier, meanwhile, is one of few fighters that has wins in three different weight classes – as he has wins at heavyweight, light heavyweight, and now middleweight in the UFC – and has the power to shut Adesanya’s lights off.

Both Adesanya and Cannonier are strikers which should make this an intriguing matchup as the champ is the better technical striker while Cannonier has legit one-punch KO power. However, we haven’t seen Adesanya get hit all that much and be in much trouble except for the bout against Gastelum which was a back-and-forth war.

Israel Adesanya has vowed to make a statement and wants this fight to look like Anderson Silva vs Forrest Griffin and there is a good chance he can do just that. Adesanya will be much faster than Cannonier who is slow and methodical as he waits for that perfect punch.

Early on I expect Adesanya to find his range and pick apart Cannonier with his jab and leg kicks and then he will start to bring it to the challenger. This fight will look very similar to Adesanya-Costa where the middleweight champ was so much faster and a better striker and just picks Cannonier apart and ultimately gets the TKO in the second or third round for UFC method of victory betting. At Barstool, you can bet Adesanya by KO, TKO, or DQ at +165. To win in the second round is +700 and the third round is +1000.

The champ will be used as a parlay piece later on for our UFC picks and parlays.

In the co-main event, Alexander Volkanovski looks to defend his featherweight title as he faces Max Holloway in their trilogy bout despite Volkanovski winning the first two.

It’s clear Volkanovski and Holloway are the two best featherweights alive and the second fight was super close with many thinking Holloway won, which is why we are getting the trilogy. In the first fight, Volkanovski used leg kicks and his jab to just out volume Holloway and win a clear-cut decision. In the rematch, the Hawaiian brought it to the champ and dropped him in the first two rounds and had a lot more success.

This fight is easily my most-anticipated on the card but since the rematch, Volkanovski looks like he has gotten so much better while Holloway in his last fight took a ton of damage against Rodriguez. His chin has been a huge part of his game but it eventually will go soon. Yet, I don’t think it will be this fight, instead, it will be a very competitive fight but it will be Volkanovski doing enough to win a decision (+125) and defend his belt again.

Other UFC 276 Picks and Parlays:

Alex Pereira (-121): If Strickland wrestles he will win this fight, yet I think his ego won’t allow him to do that and he will get in a striking match with one of the best kickboxers ever and it will be Pereira finding the second-round TKO.
Robbie Lawler (-124): Barberena gets hit too much and Lawler will find the right shots and hurt Barberena to get the decision win.
Sean O’Malley (-278): O’Malley finally gets a top-10 opponent but he gets the right matchup as he will become the first person to TKO Munhoz as his striking is too good. Parlay O’Malley and Adesanya for -143 odds for much better value. If you’re looking to boost those odds even more, include Maycee Barber over Jessica Eye in the prelims to increase those parlay odds to +147