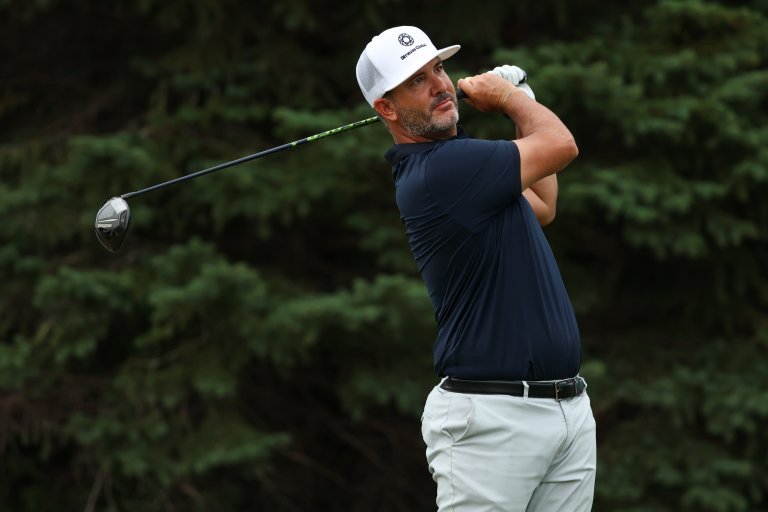 Through 53 holes of the 3M Open, Scott Piercy was threatening to run away with his fifth career PGA Tour victory, as he held a six-stroke edge. However, he hit a shot into the water on the final hole, leading to a bogey, and his playing partner Emiliano Grillo birdied to cut the lead to four shots.

Before the week began, Piercy was not among the favorites to earn the title. Grillo was also a long shot at +6500, and we loved the value on him at that number.

Though Piercy is an experienced winner, he hasn’t tasted success in seven years in an individual tournament (he did win the 2018 Zurich Classic, which is a two-man event). Grillo, His closest purser, has been stuck on the lone PGA Tour title that he won in 2015. A further shot behind is Tony Finau, who has two wins to his credit, and Doug Ghim, who is searching for his maiden triumph.

Odds as of July 23rd at DraftKings Sportsbook

Can Piercy Be Stopped?

Scott Piercy’s final hole blip certainly has brought more of the field into play for Sunday, though just seven players have shorter than +11000 odds to win it all. He’s been out in front all week, co-leading after Thursday and holding the outright lead after Friday and now Saturday. He has just three bogeys all tournament, against 21 birdies, which is tops in the field.

Scott Piercy takes a 4-stroke lead into the final round of the 3M Open at 18-under 195; is 2-for-5 when attempting to convert a 54-hole lead/co-lead into victory on TOUR (2011 Barracuda Championship, 2015 Barbasol Championship).

It’s no surprise that he’s putting well, given that he’s leading, as he’s tops on the dance floor, picking up over eleven shots on the field. He’s also eighth in SG: tee-to-green. Normally a golfer with a four shot cushion would have odds even shorter than -140, suggesting there’s not total confidence he’ll get the job done.

Finau is five adrift, but sports the second shortest odds at +450. He’s clearly comfortable on this track, with three top-30’s in three tries, including a T-3rd in 2020. He is third in final round scoring average this season, compared to Piercy, who is T-148th. However, with him racking up a boatload of near misses in his career, it’s hard to go all-in on him at those odds, given that he has just the two trophies.

Emiliano Grillo (+600): We were high on the Argentinian before the week at +6500, so why stop now? Just two starts ago he was T-2nd at the John Deere Classic, so he’s close to popping, and he’s the closest challenger to the leader. Through 54 holes, Grillo is fifth in SG: tee-to-green, and seventh in scrambling. Four of his last six Sunday’s have produced a round of 69 or better. He, like Finau, who was also T-3rd at this championship two years ago.
Tom Hoge (+1800): Tom Hoge started the season smoking hot, with a victory at Pebble Beach, a runner-up and a T-4th early in the campaign. He shockingly has missed his last six cuts after placing T-9th at the PGA Championship but has found form this week. He’s six off the pace, in fifth position, but is first in SG: approaching the green, second tee-to-green and second in greens in regulation. That should give him plenty of looks at birdie to make a Sunday charge.