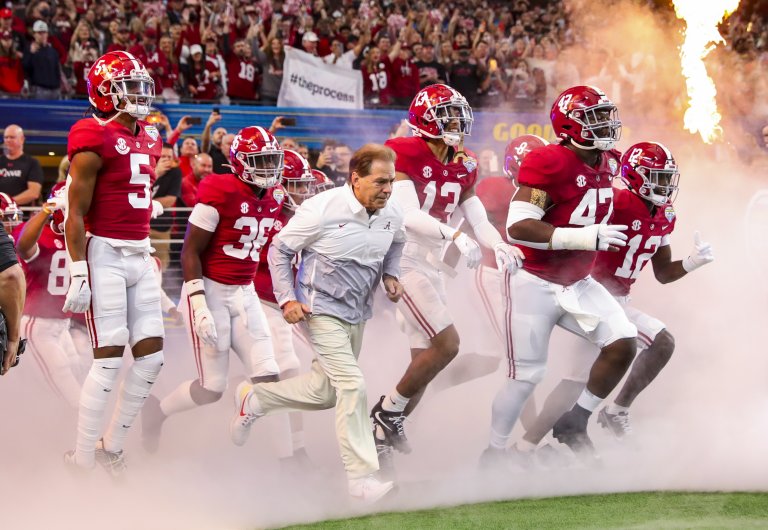 As it has for a decade in College Football, all roads lead through Alabama en route to the 2023 National Championship.

While college football is constantly evolving, the helmets of the top teams seemingly don’t.

The Crimson Tide remain the preeminent College Football brand. In what may be a rematch from the first-ever College Football Playoff Final, oddsmakers have the Ohio State Buckeyes hot on their heels. The Heisman isn’t the only trophy these two teams will be battling for.

Meanwhile, Georgia awaits, lurking in the background as the third-favorite in the National Championship odds.

Are you ready to bet on the 2023 National Championship?

Odds as of August 17 at Barstool Sportsbook.

Alabama in a familiar spot

Led by the immortal Nick Saban, Alabama is in a league of its own. Since the BCS National Championship game was replaced by the College Football Playoff in 2014, they have participated in six of the eight championship games, winning three of them.

Although the Tide lost many key performers to the 2022 NFL Draft, they return easily the most talented roster in College Football.

Heisman trophy winner Bryce Young is back to steer the Crimson Tide towards another National Championship.  Aided by former rival turned teammate Jermaine Burton from Georgia, this offense could be even more explosive than last season.  Vanderbilt transfer Tyler Steen adds to an already gifted offensive line, as the Tide return all their interior starters.

Here’s a look at Bryce Young, Jalen Milroe and Ty Simpson getting some throws in today at #Alabama fall practice. pic.twitter.com/gNXb2zeB61

Not only has Saban pillaged his rivals in the SEC using the transfer portal, but Alabama also welcomes the number two recruiting class in the nation.

On top of that, the Crimson Tide boast the popular choice to be the number one pick in the 2023 NFL Draft, Will Anderson Jr. Anderson brutalized offensive lineman last season. Ultimately leading the nation with 31 tackles for loss, while registering 17.5 sacks. Should he be anywhere near as dominant in 2022, Alabama’s defense will be a suffocating unit.

Buckeyes Look to Bounce Back

Ohio State head coach Ryan Day will look to guide his squad back to the top of the College Football mountain. Surprisingly, Ohio State disappointed last season. Losing “the Game” versus  Michigan, and struggling down the stretch. Luckily, all the pieces are in place for a bounce-back campaign, and perhaps a run to the 2023 National Championship.

Above all, the Buckeyes will look to build off of last year’s extraordinary Rose Bowl victory.

CJ Stroud and Jaxson Smith-Njigba are going to be a LETHAL duo this year @BarstoolOSU pic.twitter.com/ZQzR37vjNK

The Ohio State returns both catalysts of that thrilling victory over Utah, Heisman favorite CJ Stroud and receiver Jaxson Smith-Njigba. Following Justin Fields, Stroud is the most recent Ohio State quarterback to truly blossom in Day’s scheme. He dominated opponents in 2021, throwing for 44 touchdowns and just 6 interceptions. Should Stroud be able to maintain his efficiency and clean up his mental errors in the red zone, the sky is the limit for this stacked squad.

After losing an extraordinary amount of talent to the NFL, many would think the Georgia Bulldogs would struggle to compete for College Football’s biggest prize.

Thankfully, National Championship-winning quarterback Stetson Bennett will be back in Sanford Stadium this fall. Bennett does not get enough credit for leading this offense to a title. He may not be the next Aaron Rodgers, but Bennett threw 27 touchdowns while averaging 10 yards per attempt, and throwing only 7 interceptions.

From walk-on to national champion ??

Kirby Smart reflects on the remarkable story of his QB, Stetson Bennett. pic.twitter.com/l5bAZH6sKv

Additionally, the Bulldogs enjoy an amazing level of NFL talent in the tight end room. Top target Brock Bowers, who led the team with 56 receptions and 13 touchdowns a year ago, is now joined by LSU transfer Arik Gilbert and the 6’7 Darnell Washington. Without a doubt, Georgia’s staff will use their mammoth tight ends to create mismatches all over the field.

On the defensive side of the ball, Jalen Carter anchors the defensive line. For Georgia last season, Carter may have been the most gifted lineman on the field. That’s saying something, as Jordan Davis and Devonte Wyatt, his two linemates, both were drafted in the first round. Moreover, National Championship game hero Keelee Ringo returns as the cornerstone of head coach Kirby Smarts’ secondary.

Betting against the Crimson Tide is not for the faint of heart. Nick Saban’s defense returns seven starters from a year ago and added former 5-star cornerback Eli Ricks from LSU. This unit will once again rank among the best in the nation.

Georgia head coach Kirby Smart may struggle to replicate his defensive success from last year. This team may struggle to keep pace without an elite defensive unit. Stetson Bennett is reliable and dependable, but he’s no candidate in the Heisman Trophy odds.

Ohio State boasts perhaps the most dominant group of skill position players in the nation. With All-American prospects all over the field. Look for their new assistants to add a level of physicality, as the Buckeyes were dominated in the trenches in both their losses last year. With an ascending quarterback, an elite group of receivers and a stout defensive line, Ohio State has every reason to believe they can be champions.