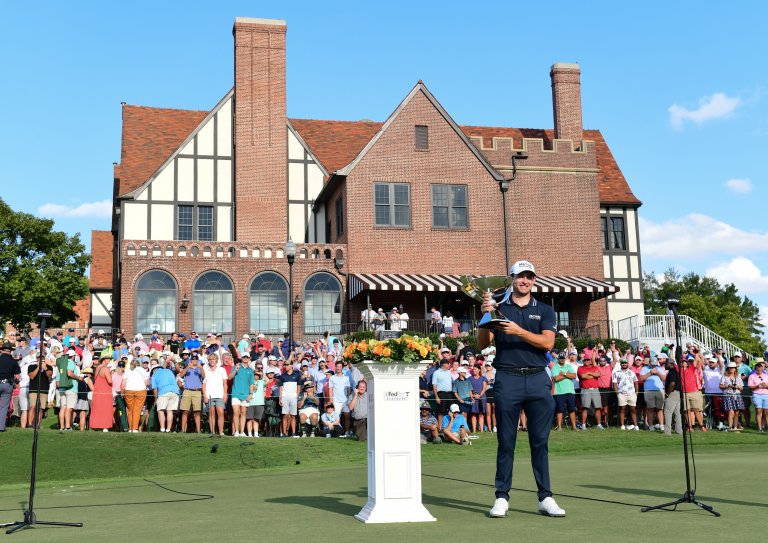 The Tour Championship from Atlanta, GA starts Thursday, August 25th
Just 30 golfers start the FedEx Cup finale at pre-determined scores based upon their playoff standings
We’ve narrowed down the golfers with the best chance of emerging victorious and provided the best value bets below

The culmination of the FedEx Cup Playoffs with the $18 million dollar prize begins Thursday at the Tour Championship from East Lake Golf Club just outside Atlanta.

This is the fourth year of the altered FedEx Cup format which sees Scottie Scheffler starting the tournament in the lead by two over Patrick Cantlay with every golfer’s score staggered based on where they’re ranked. Cantlay won it last year, looking to become the first player ever to win back-to-back FedEx Cups.

Cantlay became the first ever player to win a FedEx Cup Playoff event for the second consecutive year as he clipped Scott Stallings by just a single stroke at the BMW Championship. In the third through fifth positions are FedEx St. Jude Champion Will Zalatoris, Xander Schauffele and Sam Burns.

Since this is just the fourth year of the current FedEx Cup format, it is important to note the starting positions for all golfers competing. Naturally, the top players on the points list will have a better chance of securing victory, as world #1 Scottie Scheffler begins at 10-under par, with the 26th through 30th ranked golfers starting a full ten strokes behind.

In the first three iterations of this format, Rory McIlroy won in 2019 despite beginning five shots off the lead, then Dustin Johnson and Cantlay secured the following two FedEx Cup titles as they led entering the week.

Xander Schauffele, who finished T-3rd in last weekend’s BMW Championship, absolutely loves this track. He won here in his debut performance in 2017, then was a solid T-7th when he defended his crown in 2018.

Factoring in 72-hole scores the last three years (not including starting strokes), he was second best in 2019, would’ve won the tournament had everyone been on even keel to begin the week in 2020, then had the third lowest gross score last year.

He begins this championship four behind Scheffler with +600 odds to overtake him to win the FedEx Cup. With three wins in his last ten events, and his propensity to perform so well at East Lake, he’s got a tremendous chance to claim the season-long points race.

Will Zalatoris (+1000): Will Zalatoris comes in three adrift of Scheffler’s edge. Two starts ago he claimed his first PGA Tour title at the FedEx Cup Playoff opener in Memphis. He withdrew at the BMW Championship, citing a bad back, though that was precautionary given his high standing on the points list. In the last 36 rounds, he’s second in ball striking and fourth in total strokes gained.
Jon Rahm (+1600): The mountain may be too steep for Jon Rahm to climb, as he’s seven behind, but he’s been playing wonderfully in the postseason. He followed a T-5th at the FedEx St. Jude Championship with a T-8th at the BMW. Last year he tied for the lowest 72-hole gross score as he was runner-up in the FedEx Cup.
Sam Burns (+2200): Sam Burns begins the championship five back of top spot. He’s racked up three titles on the campaign already, at the Sanderson Farms, Valspar and Colonial. Burns is seventh in birdie average for the season, something that will be necessary to close the gap.