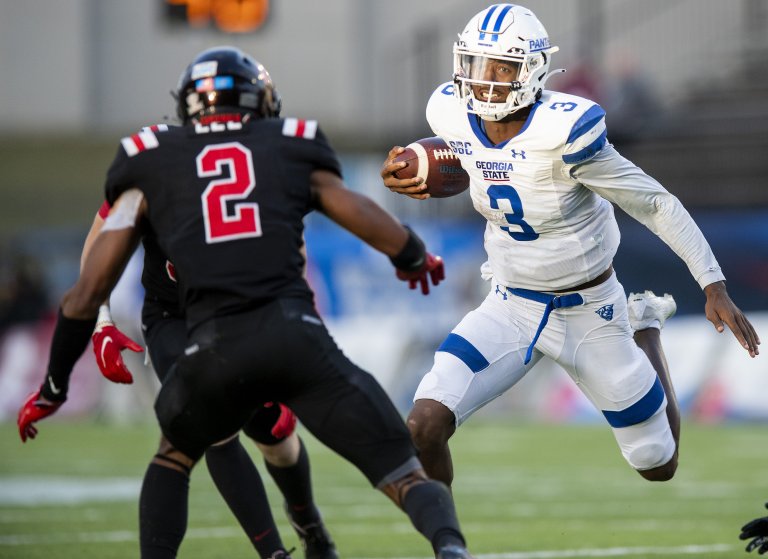 Things are about to get a whole lot more interesting this season in the Sun Belt. 2022 will mark the debuts of Marshall, Southern Miss, Old Dominion and James Madison, boosting the overall appeal and competitiveness of the conference.

Louisiana-Lafayette took down Appalachian State in the conference title game in 2021, and the two programs make up the shortest and second shortest priced teams to win the Sun Belt Championship this season.

Odds as of August 11th at DraftKings Sportsbook.

Appalachian State is a +220 favorite in the college football conference title odds, as they look for their fifth title in seven years.

Newcomer James Madison, meanwhile, is not listed in the odds above as they are ineligible for a Sun Belt title or Bowl Game in 2022.

Appalachian State Has Too Many Holes to Fill

Let’s start at the top. The Mountaineers have been the most consistent team over the past four seasons, reaching the Conference Championship Game three times.

Last season they averaged 34.5 points per game, and will return veteran QB Chase Brice to run their pro-style offense. The offensive line is terrific, headlined by four returning starters, while the running game that averaged 5 yards per carry and 2 TDs per game in 2021 returns its three-headed monster.

The concern offensively is the pass-catching corps. Appalachian State’s top-three receivers from a season ago are gone, leaving 12-catch man Christian Wells as the leading returning target.

Defensively there are holes everywhere. Defense has been the calling card for the Mountaineers over the past few years, but this season, expectations should be tempered.

Just 56% of that unit’s production from 2021 is returning. Five of their top-seven linebackers are gone, while their top corner Shaun Jolly left for the NFL. The defensive line is small which is going to be a huge problem against strong, physical running teams like Georgia State for example – more on them later.

The lack of returning production at receiver and on the defensive side of the ball is enough to make Appalachian State an easy fade at their current price.

A bit further down the oddsboard, we’ll find the Chanticleers at +500. They’re by no means a threat in the National Championship odds, but they are coming off back-to-back 11-win seasons.

The biggest reason to be bullish on Coastal Carolina is the play of quarterback Grayson McCall. The potential dark horse Heisman Trophy odds contender helped lead the program to the nation’s best third down conversion rate in 2021, while the team was fifth in total offense.

#CoastalCarolina QB Grayson Mccall says his newest targets are coming along nicely. Highlights brought to you by @ChrisParksWBTW pic.twitter.com/hFTojOqWGs

The running game is solid and the offensive line is returning the majority of its starters. The lack of receiving depth, however, is a concern. Their top wideout and tight end targets are gone, leaving running back Braydon Bennett as the most productive returning receiving option on the team.

That would be a disaster for most programs, however, McCall’s talent is strong enough to elevate everyone who steps on the field with him.

Defensively, the Chanticleers will be a work in progress. The defensive line, spearheaded by 12.5-sack man Josaiah Stewart, is in good shape but the linebacking corps is a mess. On the back end D’Jordan Strong headlines a defensive back group with potential, but still features plenty of unproven names.

The Sun Belt is loaded with talent (and teams) this fall. Get to know their top two players, one on offense and one on defense.

Darrell Luter Jr. is a ⭐️

Grayson McCall is the epitome of efficiency pic.twitter.com/6ivuqZBamY

Still, any team with McCall under center is worth a flier. I wouldn’t fault anyone for siding with Coastal Carolina, however, I’ll be looking a bit further down the board.

This brings us to the Panthers. Georgia State finished last season on a 7-1 run, upsetting the Chanticleers before destroying Ball State 51-20 in the Camellia Bowl.

They’ve produced three straight winning seasons, each culminating with a Bowl victory, and went 6-2 in conference play in 2021.

Offensively, 72% of last season’s production is returning, fuelled by an elite running game and dual-threat QB Darren Grainger. The senior ran for 660 yards and three scores in 2021, which was a big reason the team averaged 227 yards on the ground and over 5 yards per carry.

Grainger also posted a 19-to-4 TD-to-INT rate in the pass game, and has a receiving corps that is loaded with promise. Tight End Aubrey Payne headlines the group after a 7-TD season in 2021.

Defensively, 80% of their production from last season is back. They limited opposing backfields to 3.5 yards per carry, averaged three sacks per game and forced a conference-best 1.6 turnovers per contest.

All signs point to this program being a serious contender, which makes their +800 price tag to win the Sun Belt a screaming value.