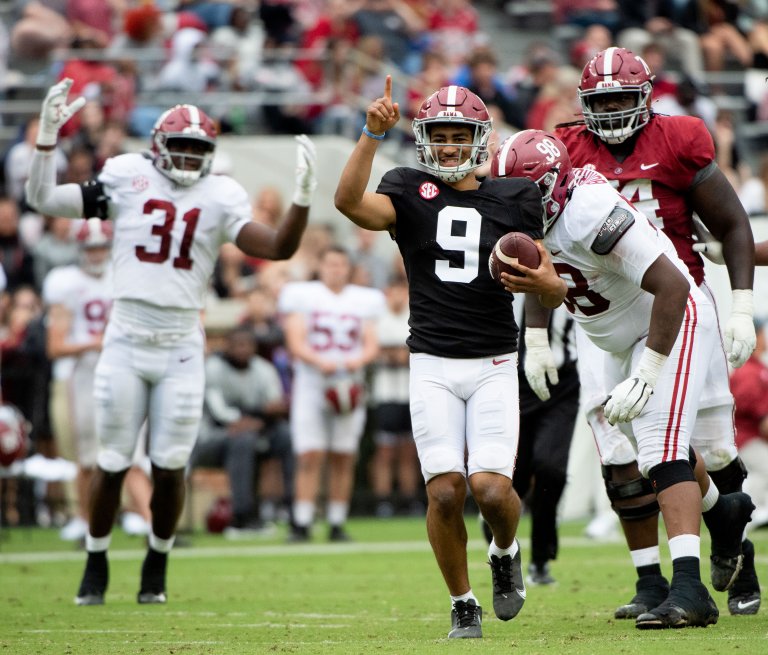 Alabama and Georgia are heavy favorites to meet in the SEC Championship
The Crimson Tide beat the Bulldogs for the conference title last year, only to lose to Georgia in the National Title game
Read below for SEC odds, analysis, and betting prediction

Last season, the Southeastern Conference was all about the Georgia Bulldogs in the East and the Alabama Crimson Tide in the West.

In what is considered the toughest conference in all of college football, ain’t nothing changed in 2022.

The two powerhouse squads are on a collision course in the Conference Championship odds, an SEC rematch that seems almost inevitable.

There’s a distinct possibility they are the finalists for the top prize again, with the Tide and ‘Dogs 1-2 in the National Championship odds.

Odds from DraftKings on Aug. 8

Last year, the Crimson Tide mashed the Bulldogs 41-24 in the SEC Championship, claiming the conference crown while putting an end to Georgia’s perfect season.

Georgia bounced back, however, taking on Alabama in the national title game and winning 33-18.

Can another team shift the balance of power in the SEC?

Alabama and Georgia Above All

In the last decade, Nick Saban’s club has been in the SEC Championship game seven times, winning all seven. The only other schools to represent the SEC West since 2009 have been Auburn and LSU.

Anderson led the nation in sacks with 17.5, while also delivering 34.5 tackles for loss. At +4000 odds, he’s not a bad longshot bet to claim the Heisman, considering ‘Bama is expected to be dominant again.

As always, the Tide feature a roster of star players, including 10 named to the preseason all-SEC first team.

Among them is Georgia Tech transfer Jahmyr Gibbs at running back, while transfers Tyler Harrell and Jermaine Burton have a chance rack up numbers with the departures of receivers Jameson Williams and John Metchie III.

If ‘Bama can sort out their O-line woes — they surrendered 41 sacks a season ago — it should be a lot of Tide talk in terms of the SEC and the college title picture.

While Georgia doesn’t have the same body of success, they share a similar pedigree with Alabama in the SEC East. The ‘Dogs have made it to six SEC Championship games in the last 10 years, though they’ve only been able to win the crown a single time, against LSU in 2017.

The defending national champions boast six players on the preseason all-SEC first team, though you might have concern that the Bulldogs only return 10 starters from last year’s title team. Don’t.

Defensive MVP for the game against Kentucky this past Saturday : Jalen Carter

The best performance of Carters career by far came against the Wildcats and boy was it a [email protected] pic.twitter.com/iE3sB9bGge

Georgia has a dearth of talent to step into the mix and keep the ball rolling. Defensively, they might not be as good as a season ago when they held teams to 10.2 points a game and 4.2 yards per play, but there’s plenty of star power at all three levels, including Jalen Carter up front, Robert Beal and Nolan Smith at LB, and Kelee Ringo anchoring the secondary.

Can Anyone Else Challenge in the SEC?

Texas A&M could very well be the cream of the crop in any other conference, while they play third fiddle in the SEC.

Jimbo Fisher boasts the top recruiting class of 2022 (ahead of both Alabama and Georgia) and he seems to have a bevy of talented QB’s to choose from. Haynes King was the starter last year, but he’ll have to contend with LSU transfer Max Johnson, and 5-star signee Conner Weigman.

“From 28 yards away…for an Aggie upset win…AND ITS GOOD”
Seth Small hits the game winning field goal from 28 yards out as Texas A&M knocks off #1 Alabama at Kyle Fieldpic.twitter.com/CgIlkg5viD

The program is headed in the right direction, including a win over Alabama last year, but they also dropped four other games in the West.

It’s just hard to see any other team emerge out of the division with Alabama.

Hendon Hooker 75 yard rope for a TD against Florida … 🌽 pic.twitter.com/qfhuMKwZkO

In the East, there are two teams to consider: Tennessee was a top-10 unit in total offense and scoring and they return pivot Hendon Hooker.

Kentucky is the other team battling with the Volunteers behind Georgia in the division. They have a great QB in Will Levis, and Chris Rodriguez Jr racked up better than 1,400 rush yards, but an offense than put up 32.3 points per game could only muster 13 against Georgia.

And that’s the rub. There is nowhere else to turn to in the SEC. All roads lead to ‘Bama and Georgia.