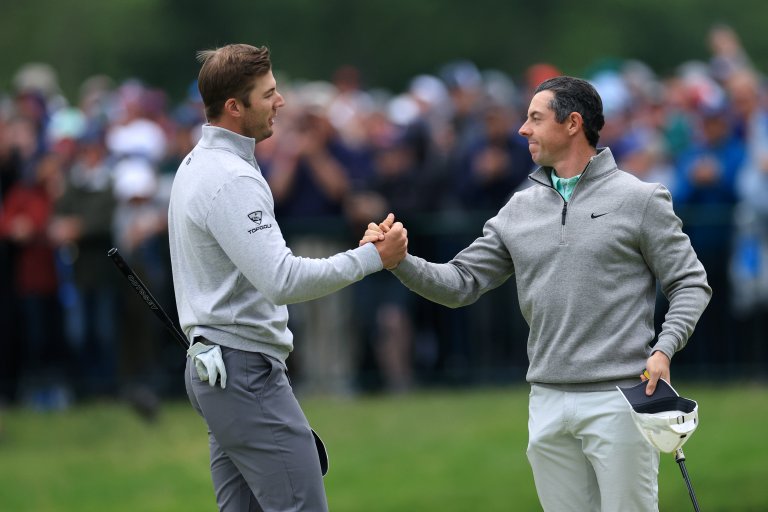 Just one week after Matt Fitzpatrick’s brilliant U.S. Open victory, the world’s best head to the Travelers Championship. The field does not lack star power, with Scottie Scheffler, who was co-runner up at the year’s third major, and Rory McIlroy, who finished T-5th, teeing it up. They’re joined by three others in the top-ten of the world rankings, including Justin Thomas, Patrick Cantlay and Sam Burns.

TPC River Highlands always produces an entertaining tournament, as the event is widely considered one of the most fun by players. It’s a shorter course by tour standards, as it plays to less than 7,000 yards as a par-70 track. Last year, Harris English outlasted Kramer Hickok in an epic eight-hole playoff. That marked the twelfth time in the last 15 years of this championship that the winning margin was either decided in a playoff, or by a one stroke edge.

Sam Burns has found himself in the mix of every golf tournament he’s been playing for the last month. In the last four times he’s competed, he’s gone T-20th, WIN, T-4th, T-27th. That last result came at the U.S. Open, where he was just three back entering the final round before finishing with a tough Sunday.

In the last 24 rounds, Burns has put together some impressive ‘strokes gained’ statistics.

Burns has racked up three titles on the campaign, at the Sanderson Farms, Valspar and Charles Schwab. He’s also shown a comfort level at this track, as he’s placed within the top-25 the last two years at this championship. At +1800 odds, you’re getting him at longer odds than the top-four players on the board, which is decent value given that he’s contending a ton this season.

Joaquin Niemann (+3500): Joaquin Niemann picked up his second tour win earlier this year at Riviera, and he’s been solid ever since. The Chilean sensation has been T-35th or better in seven of his last eight tournaments, is eighth in SG: tee-to-green and eleventh in total strokes gained on the campaign. In his last 24 rounds, he ranks inside the top-20 in six key ‘strokes gained’ categories, including fourth off-the-tee and 14th in ball striking. Two starts ago, he was T-3rd at the Memorial.
Aaron Wise (+5000): Aaron Wise has been popping up on leaderboards recently, most notably when he was runner-up at the Memorial. He followed that up with a respectable T-27th at the U.S. Open, his fifth top-30 result in the last six times teeing it up. In the last twelve rounds on tour, he’s fifth in total strokes gained and seventh in SG: approach as he’s been a tee-to-green savant of late.
Denny McCarthy (+6500): Denny McCarthy has built his reputation on the backing of a strong putter, as he ranks sixth on the greens this season. He’s also been hot, making eleven straight cuts in stroke play tourneys, with a T-5th at the Memorial and T-7th at the U.S. Open his last two tournaments. Since losing strokes on the greens in his first event of 2022, he’s not done so in 14 straight tournaments.