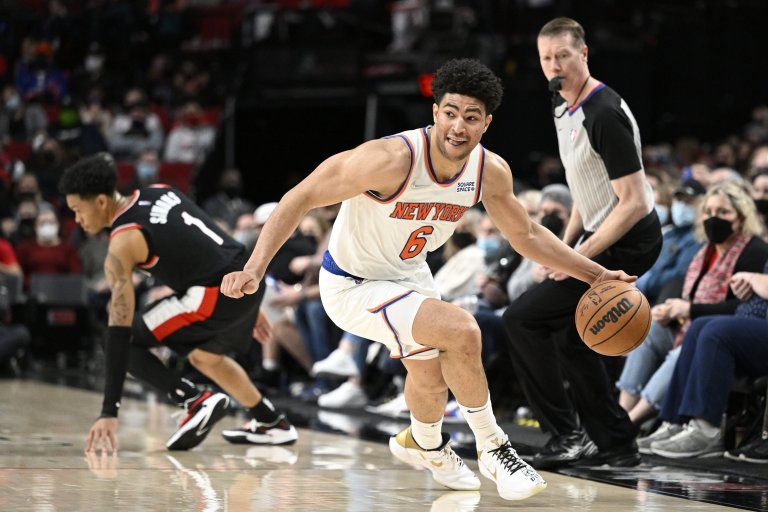 The NBA Summer League is the perfect opportunity for rookies and G-League players to make a name for themselves in front of scouts and executives. There’s also a flashy new ring to play for that will be awarded to the winner in Las Vegas.

On Sunday, the New York Knicks (3-1) clash with the Portland Trail Blazers (3-1) in the championship game. The tip-off is scheduled for 3 PM ET at the Thomas & Mack Center. The Blazers already beat the Knicks on July 11th behind a team-high 18 points from Trendon Watford.

Odds as of July 16th at FanDuel Sportsbook.

The Knicks are a 2.5-point favorite for Sunday’s matchup and have beaten their opponents by an average of 11.8 points.

As for Portland, they’re outscoring other teams by 8.3 points, despite being without top pick Shaedon Sharpe for most of the Summer League due to an injury he sustained early on.

Both of these teams lost one game in the NBA Summer League but made the Final due to having the two best point differentials.

Quentin Grimes Balling Out For NY

Quentin Grimes showed glimpses of brilliance in his rookie year with the Knicks, but he didn’t get heavy minutes, which is understandable. In Vegas though, the ex-University of Houston star has been making a loud statement. The guard is second in the NBA Summer League with 23.5 points per night, which only trails Cam Thomas of the Brooklyn Nets.

The experience Grimes got at the NBA level last season is certainly paying off. He looks very confident with the rock in his hands, showing off his impressive athleticism and handle by doing a great job of attacking the hoop.

Jericho Sims is also making his presence felt as a potential frontcourt bench piece in 2022-23. He’s averaging 11.3 points and 10.3 rebounds. He’ll be an important figure in the title game in regards to the battle on the boards.

Portland won this tournament just once before in 2018 and will be looking to do so again on Sunday. So far, they’ve been led by former Tennessee standout Keon Johnson, who was the 21st overall pick in the 2021 NBA Draft by the Los Angeles Clippers. The Blazers acquired him in the Norman Powell trade back in March, and he’s shown serious promise in Sin City.

Johnson is averaging a team-high 17.3 points to go along with four rebounds, 2.3 assists, and 1.5 steals per night while shooting 40% from deep. He’s also playing 31.4 minutes per contest. Johnson went off for 25 points in the Blazers’ most recent win over Jabari Smith Jr and the Houston Rockets.

Watford, Brandon Williams, and Jabari Walker are all putting up double-digits in points as well and will need to bring their best in the final to complement Johnson, who is proving to be the star of this NBA Summer League squad.

In the other meeting between the Knicks and Trail Blazers, Portland dominated in one notable category: Bench points. They received 41 points from their second unit to just 11 for New York.

I really like how well-rounded the Blazers’ Summer League squad is with all the contributions from non-starting players. I believe that will make a difference in the final. Take them on the moneyline in the NBA Summer League Final odds.