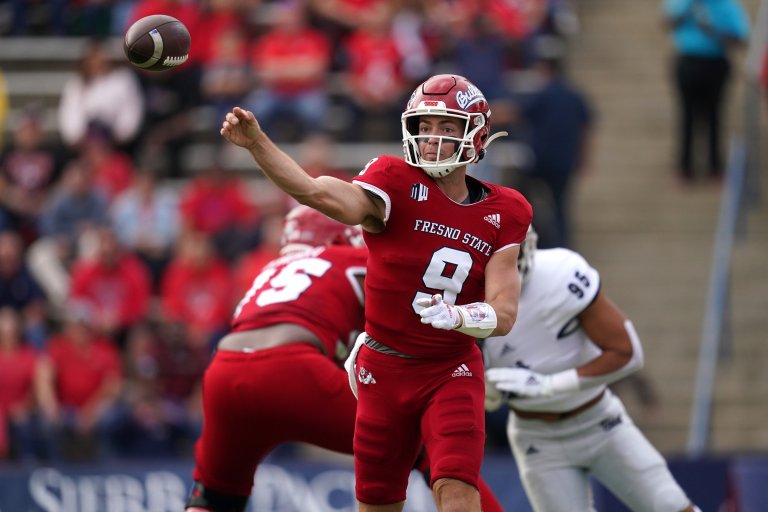 Boise State and Fresno State are near-equal favorites to win the MWC championship in 2022
Third-choice Air Force has appeared only once — and lost — in the league title game
Read below for 2022 Mountain West Conference odds, analysis, and betting prediction

Fresno State is favored to win the West Division of the Mountain West over San Diego State in 2022. The Bulldogs have the Mountain West’s best pro quarterback prospect in senior Jake Haener and a proven coach in returning Jeff Tedford, back after a two-year hiatus for health reasons.

Boise State is favored to win the Mountain Division over Air Force in 2022. The Broncos appeared in four straight title games from 2017-20, winning in the odd seasons, before losing the division in 2021 to upstart Utah State, which went on to beat San Diego State for the title.

Let’s take a look at the 2022 Mountain West Title odds and offer your our betting pick for who will win the conference.

The Mountain West is divided into two six-team divisions — each team plays all five other schools in its division every year and three team from the opposite division on a rotating basis. (The format will be discontinued in 2023.) The randomness of the 2022 schedule appears to benefit contenders Utah State, Fresno State and Air Force.

Defending champ Utah State misses both Fresno State and San Diego State. Air Force misses Fresno but plays the Aztecs on the road. On the other hand, Boise State plays both the Bulldogs and Aztecs on the first two weeks of October. Both games are on the blue turf in Boise, which has worked in the Broncos’ favor in the college football conference title odds.

There were mitigating factors. Utah State, picked to finish fifth in the Mountain in 2021, did not play West 1-2 finishers Fresno and San Diego State in the regular season before clobbering the Aztecs in the title game. San Jose State, picked fifth in the West in 2020, did not play scheduled regular-season games at Boise State and Fresno because of COVID-19 cancellations.

Fresno State’s Haener and Utah State’s Logan Bonner are in the top 10 in passing yards among returning quarterbacks. Haener had 4,096 yards a year ago , sixth among returnees, and Bonner had 3,628, tied for ninth.

Which of these returning passing leaders are you most excited to watch this year? pic.twitter.com/nXQ6AFKAU6

In his spotlight game, Haener completed 39 of 53 passed for 455 yards and two touchdowns in a 40-37 victory over UCLA at the Rose Bowl on Sept. 18, throwing the winning touchdown pass with 14 seconds remaining. Bonner, a sixth-year senior who spent his first four seasons at Arkansa State, had  a school-season record 36 touchdowns and 12 interceptions with the Aggies after reuniting with coach Blake Anderson.

Air Force’s Haaziq Daniels slips under the radar because of the Falcons’ reliance on halfback Brad Roberts in the triple-option attack, but Daniels had a 162.1 passing efficiency rating in 2021. That would have ranked No. 11 in the FBS had he had enough attempts to qualify.

In addition to Daniels, halfback Brad Roberts is a driving force in the Falcons’ triple option, an offense that is so seldom seen that it can be hard to prepare for. Roberts rushed for 1,356 yards last year, third in school history and most of the offensive line returns. The averaged 36:35 time of possession last year, tops in NCAA Division I.

The Falcons also bring back six starters from a defensive unit that was No. 4 in Division I in total defense at 296.5 yards per game. Only Wisconsin, Georgia and Minnesota gave up fewer yards per game.

This is not a conference in which bucking the preseason odds hurts, inasmuch as no team stands out in the national championship odds picture.

Coach Blake Anderson knew what he was doing when he brought Bonner with him to Logan last season, when the Aggies surprised the league. It would not be as much of a surprise if they successfully defend.

They will have their hands full at Alabama on Sept. 3, but in addition to the league misses against Fresno State and San Diego State, they play Air Force at home. The regular-season finale Nov. 26 at Boise State could decide the Mountain Division and will give the Aggies a chance to avenge a 27-3 home loss in 2021.