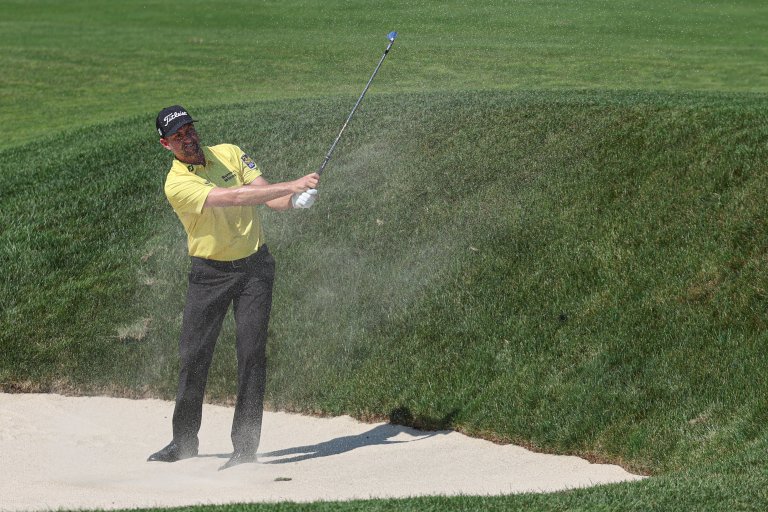 Jun 26, 2022; Cromwell, Connecticut, USA; Webb Simpson plays a shot from a fairway bunker on the 12th hole during the final round of the Travelers Championship golf tournament. Mandatory Credit: Vincent Carchietta-USA TODAY Sports

The John Deere Classic from TPC Deere Run in Silvis, IL tees off Thursday, June 30th
Adam Hadwin is the +2500 favorite to be atop the leaderboard after day one
See the best bets and odds to grab the first-round lead in the article below

The PGA Tour heads to Silvis, Illinois for the John Deere Classic, and unlike the last few events, the field isn’t particularly strong – nobody in the top-50 in the world rankings is teeing it up. Adam Hadwin is the favorite to claim the title, followed by Webb Simpson. The players will need to shoot low scores to thrive at TPC Deere Run, with the last twelve winners all shooting at least 16-under-par en route to the title.

With there not being top ranked golfers competing this week, that allows for plenty of opportunities for John Deere Classic sleepers and longshots to make some noise.

Odds as of June 28th at DraftKings Sportsbook.

The forecast calls for it to be mainly sunny throughout the day. Temperatures will be in the low 70’s for those starting in the morning, reaching low 90’s for the afternoon wave. Wind gusts will be pretty commonplace, with it being slightly more docile around 18 miles per hour in the AM compared to mid 20’s in the afternoon.

You have to go all the way to 58th in the world rankings before you see a golfer teeing it up this week – and that is Webb Simpson (12:43pm tee time). The seven-time PGA Tour winner certainly has much more pedigree than the contemporaries he’s up against, and he comes in with three top-30’s in his last four starts.

Of those playing, Simpson is tied for the second best scoring average in the first round, where he’s shot in the 60’s in five of his last six Thursday’s.

Sahith Theegala (12:54pm) very nearly earned his first PGA Tour victory last weekend at the Travelers Championship. He held a slim one stroke edge on the 72nd hole, but a costly double bogey dropped him into a tie for second. That was his second top-five in his last three events, having also had a T-5 at the Memorial Tournament.

Still a tour rookie, Theegala has made ten straight cuts in individual tournaments, and has put together five top-10’s on the campaign. Considering he’s coming off a championship he led through 71 holes, it’s fairly surprising six golfers have shorter odds than him to jump out in front after 18 holes.

Adam Schenk Comfortable At This Course

Adam Schenk (7:07am) has had success at this track, placing tied for sixth in 2019, then doing even better with a T-4th last year (there was no 2020 tournament). For those two weeks, he gained over 20 total shots on the field, and over twelve tee-to-green.

Subsequently, his stats of late at this track have been impressive.

Before a missed cut at the Travelers Championship, Schenk had T-26th and T-24th showings at premier tournaments at the Memorial and U.S. Open, showing his game is close to popping. At these odds, he’s an intriguing option.