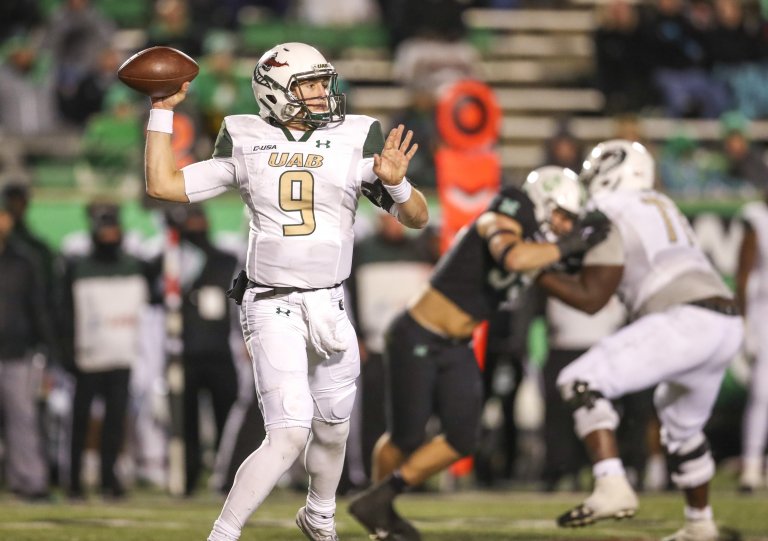 Defending champion UTSA is the slimmest of favorites to retain its CUSA title in 2022
UAB played in three straight championship games in 2019-21 and is a close second choice
Read below for 2022 CUSA odds, analysis, and betting prediction for the upcoming season

UTSA is a very slight favorite to repeat in Conference USA after winning its first championship in 2021, its ninth year in the league. Roadrunners’ senior quarterback Frank Harris had 3,743 total yards and accounted for 33 touchdowns a year ago, both second in the league behind Western Kentucky passing machine Bailey Zappe.

UAB appeared in three straight championship games from 2018-20, winning in the even years. Blazers’ quarterback Dylan Hopkins passed for only 2,274 yards a year ago, but he was eighth in the NCAA with a 166.6 passing efficiency rating and had 18 TDs against seven interceptions.

Let’s take a look at the 2022 Conference USA Championship odds and offer you our betting pick.

Odds as of Aug. 6 at DraftKings Sportsbook.

With 11 teams left in the CUSA after Marshall, Old Dominion and Southern Mississippi bolted for the Sun Belt, the league championship game will match the top two finishers in the regular season at the home of the No. 1 team. Each team is to play eight conference games in a rotating unbalanced schedule.

UTSA and UAB are in their last year in Conference USA. Both are headed for the American Athletic Conference in 2023 and are listed high in the college football win totals.

A Look at the League

UAB and Western Kentucky have been the recent class of the CUSA, with each appearing in three championship games. Upstart UTSA, meanwhile, made a successful first appearance in the title game with a wild 49-41 victory over Western Kentucky and Zappe in 2021.

Frank Harris and the UTSA Roadrunners just keep on rolling. What a season for this entire team. One of the feel-good stories of the ’21 CFB season. https://t.co/0kSDYHZpyk

Zappe and his 2021 NCAA season-record 5,967 yards passing are gone, which makes it easy to identify UAB and UTSA as the favorites. Each returns its starting quarterbacks — Hopkins and Harris, who were 2-3  respectively in passing efficiency behind Zappe. The Blazers also return running back DeWayne McBride, who had 1,371 yards and 13 TDs rushing while averaging a league-best 6.7 yards per carry.

UAB has built its success on controlling the line of scrimmage. The Blazers had a four-minute time of possession edge a year ago, when they led  CUSA in total defense, rushing defense and scoring defense.

UTSA Not Afraid of a Fight

The Roadrunners’ record might suffer early, although that should not affect their chances to repeat in CUSA. They open the season with a home game against AAC contender Houston and play at Texas in Week 3. The schedule lightens in conference play —  the Roadrunners play third-choice Western Kentucky at home and miss fourth-favorite Florida Atlantic.

The most important game of the season, the showdown against UAB, is in Birmingham on Nov. 5. Harris threw for 323 yards and three touchdowns, including the winning TD with three seconds remaining, in a 34-31 victory over the Blazers at home last season. The Roadrunners play third-choice Western Kentucky and miss fourth-choice Florida Atlantic.

The Roadrunners having to travel to Birmingham to play the Blazers this season is one of the reasons they aren’t listed as heavier favorites in the college football conference title odds.

Western Kentucky will replace NCAA single-season passing record-holder Zappe with sixth-year senior Jarret Doege, who has thrown for 10,494 yards in previous stops at Bowling Green and most recently West Virginia.

Doege’s issue is accuracy. He has a completion percentage of 64% and had 19 touchdowns and 12 interceptions for the Mountaineers last season. The Hilltoppers are also playing a new defensive scheme after finishing last in the 14-team league in total defense a year ago.

Florida Atlantic has weapons in quarterback N’Kosi Perry and halfbacks Johnny Ford and Larry McCammon III, but only four starters return on defense. Head coach Willie Taggart fared poorly in one season at Oregon and two at Florida State before returning to his alma mater in 2020. He’s 5-10 after a 5-1 start.

Charlotte returns sixth-year quarterback Chris Reynolds, but holes remain on defense. When you look around the conference, it’s easy to understand why UTSA and UAB are the only programs set at +10000 or better in the National Championship odds.

The Blazers have had the most stable program in the league under coach Bill Clark since returning in 2017 following the administration’s decision to shutter the program over financial concerns following the 2014 season.

We’ve got a new punt returner at UAB, and his name is [email protected] ? pic.twitter.com/SYNdicRvmt

Regression to the mean is another reason to like the Blazers. UTSA had five defensive touchdowns and one kick return score while finishing a league-best plus-12 in turnover ratio in 2021 — numbers that typically are not sustainable.

UAB is 4-1 SU and ATS in their five meetings with UTSA since UAB rejoined the league in 2017.  UAB failed to cover only in a 21-13 home victory in 2020. Bet the Blazers to bounce back and win the Conference USA Championship in 2022.