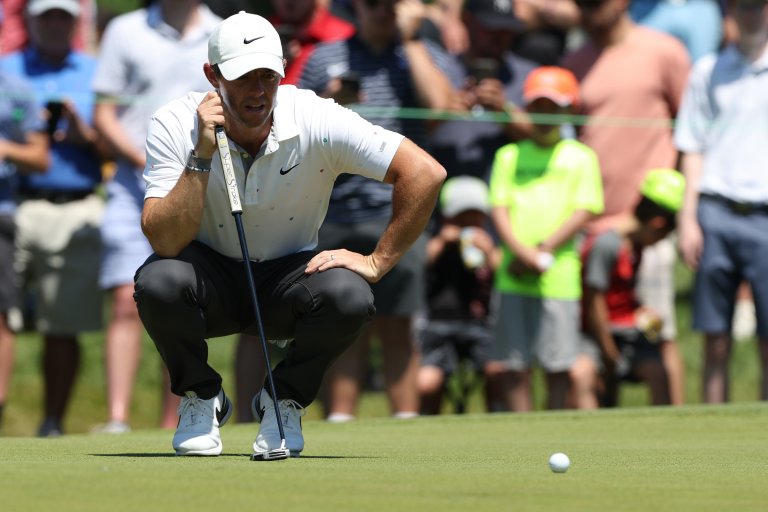 Jun 26, 2022; Cromwell, Connecticut, USA; Rory McIlroy looks over a putt on the fourth green during the final round of the Travelers Championship golf tournament. Mandatory Credit: Vincent Carchietta-USA TODAY Sports

The final major championship of 2022 heads to the birthplace of golf, the old course at St. Andrews. This is the first time this course has hosted Open Championship since 2015, when Zach Johnson won in a playoff.

Xander Schauffele comes in as the hottest player in golf, having won his last two events, including last week’s Scottish Open. Tiger Woods returns for his first official event since withdrawing from the PGA Championship. He’s won twice at this track, in 2000 and again in 2005.

Rory McIlroy, who recently won the RBC Canadian Open, is the favorite to win his second career Claret Jug, and first major championship since 2014. He’s followed by Jon Rahm, who won the U.S. Open last year. Schauffele and this year’s Masters winner Scottie Scheffler round out the top-four. Collin Morikawa is the defending champion, having edged Jordan Spieth by two strokes last year.

Shane Lowry on Cusp of Victory

Shane Lowry has had a brilliant year, though it’s been bittersweet as he’s been left coming up just short of adding to his trophy case. In 14 worldwide events, the 2019 Open champion has eleven top-25’s, including five top-10’s (along with a T-3rd at the Masters).

In his last 36 rounds, the Irishman has amassed some impressive ‘strokes gained’ statistics.

When he won the 2019 Open at Royal Portrush, he gained a whopping 19.7 shots tee-to-green compared to the field, and 14.2 off the tee. In his title defense last year, he was T-12th, part of five top-25’s in his last seven grand slam tournaments. At +2200 odds to win outright, you’re getting him at decent value, given that eight players have shorter odds than him.

Will Zalatoris (+2500): Will Zalatoris shows up in a big way at the biggest tournaments, yet frustratingly hasn’t closed the deal on one yet. In his last eight majors, he’s racked up six top-eights, with a runner-up at the Masters in 2021 and both the PGA and U.S. Open this season (he was also T-6th at this year’s Masters). In the last 24 rounds on tour, Zalatoris is second in ball striking and fifth in total strokes gained. In the majors since 2020, he’s picked up 2.73 shots per round on his competitors, which is tops of any player.
Louis Oosthuizen (+4000): Louis Oosthuizen won his first major championship at St. Andrews back in 2010, and he very nearly did it again when they returned to the Old Course in 2015, losing in a playoff. He’s heartbreakingly had eight other top-threes in majors without adding to his total, but he returns to a track he’s super comfortable on. In two LIV series events, Louis has been fifth and twelfth, showing signs that his game is in a good place.
Max Homa (+6000): Max Homa is on the periphery of the world’s best, as he sits 19th in the OWGR, his best-ever position. He’s made the cut in all three majors this season (his best being T-13th at the PGA), and has four wins since 2019. Homa is third in ball striking and SG: approach during the last 24 rounds, and provides decent longshot potential at this number, and also in the top 5/10/20 markets.