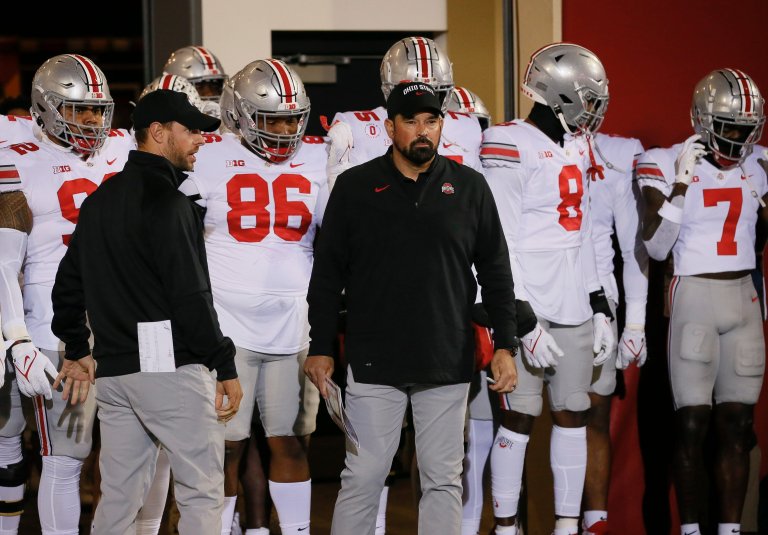 Ohio State Buckeyes head coach Ryan Day prepares to lead his team on the field during the NCAA football game against the Indiana Hoosiers at Memorial Stadium in Bloomington, Ind. on Sunday, Oct. 24, 2021. Ohio State won 54-7.

Ohio State is a -215 favorite to win the Big Ten this season
Michigan claimed the title in 2021, ending a nearly two-decade-long drought for the Wolverines
Read below for complete odds, plus analysis and bets to target to win the Big Ten in 2022

The Buckeyes have been the dominant program in the Big Ten since 2002, owning at least a share of the conference title 11 of the last 20 seasons. But after bitter rival Michigan beat OSU for the first time since 2011 last season, Jim Harbaugh’s group — not Ryan Day’s — is the reigning champs.

Alas, the Buckeyes are heavy Big Ten favorites in the College football conference title odds for multiple reasons. Day’s team possesses three of the top-20 favorites in the Heisman Trophy odds. Plus, this group is highly motivated to turn the page after embarrassing losses to Oregon and Big Blue.

Odds as of August 10th at DraftKings Sportsbook.

Not only are the Buckeyes expected to win the Big Ten, but they also have short odds in the National Championship odds. Michigan, Wisconsin and Penn State are among the conference contenders.

Buckeyes Appear to Be Class of Conference

You would think an 11-win season, thrilling Rose Bowl victory and No. 6 ranking in the final AP poll would be considered a success. But in Columbus, it’s grounds for developing a large chip on a figuratively robust shoulder. With 73% of their roster production returning in 2022 — including Heisman frontrunner CJ Stroud — the Buckeyes’ 2022 Revenge Tour is set to hit road.

Six schools projected to be favored in every regular season game:

Cade Stover says this summer has been Ohio State’s best since he arrived in Columbus, and Ryan Day also likes what he’s seen from the Buckeyes this offseason: https://t.co/8WVRnuDUlz pic.twitter.com/WI6B37Oz66

Let’s not forget: this defense wasn’t horrible last season. The run D was 28th in the nation, held Penn State to 33 yards and allowed fewer than 100 rushing yards seven times It just got exposed twice.

Meantime, the offense was the best in college football in total offense and scoring and ranked second in third down conversions. The schedule is tricky — but there’s no reason to bet against the Buckeyes.

The last time Michigan wore at least part of the conference crown was 2004, when it shared the title with Iowa. Of course, the Wolverines also won the Big Ten outright in 2003. Can the Maize and Blue go back-to-back (sort of) this season?

Harbaugh is back after flirting with the NFL, but he lost both his coordinators and a pair of key pass rushers. And unlike Ohio State, there are questions at quarterback. JJ McCarthy and Cade McNamara will battle in camp for the starting spot.

Jim Harbaugh said Cade McNamara and JJ McCarthy’s reps in fall camp will be “cut right down the middle.”

Whichever player ends up winning the job, they’ll get to hand the ball off to a superstar-in-the-making in running back Blake Corum. He rushed for 11 touchdowns and 6.6 yards per carry as a sophomore last season behind Hassan Haskins.

At the end of the day, the Wolverines seem to have too many holes to fill to be there at the end. The schedule is very soft and this group should win 9-to-10 games easily — but it’s hard to see Michigan repeating as conference champs.

If there’s one team that could play spoiler this season, it’s Purdue. The Boilermakers own a 4-5 record against the Buckeyes since 2004 (not including a vacated win by OSU in 2010). And get this: the Boilers miss OSU, Michigan and Michigan State in 2022.

With a favorable schedule, it’s quite possible Purdue could be a darkhorse. But enough to stand in the way of Ohio State in a possible conference championship game? No way.