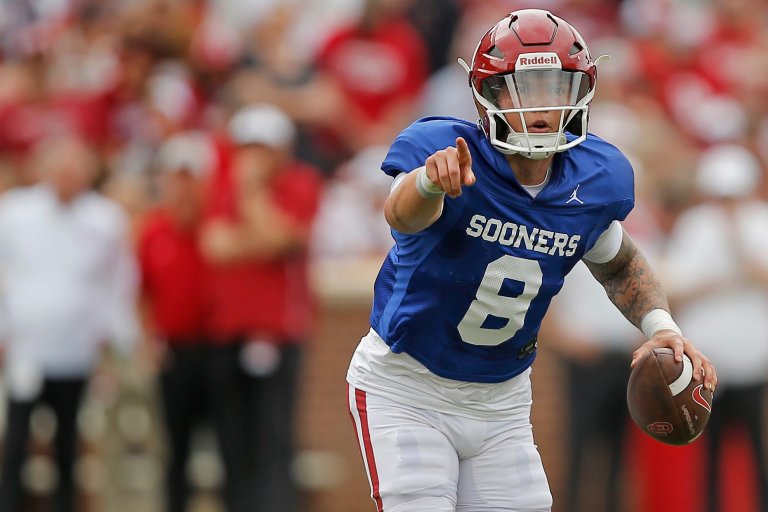 The Oklahoma Sooners are the betting favorite to win the Big 12 Conference Title
Baylor won the title last year, and sit fourth on the betting table
Read below for Big 12 odds, analysis, and betting prediction

Perhaps it’s fitting that the two teams that likely detonated the Big 12 as we know it — and perhaps, soon enough from existence — would be the ones competing for the conference crown this year.

Yet that’s where we are, as the Oklahoma Sooners and Texas Longhorns, en route to the SEC by the summer of 2025, sit head and shoulders above the rest of the field in the Big 12 Conference Championship odds.

Odds from DraftKings on Aug. 8

Whether they’re the best bet is debatable, as the field of contenders includes the always-tough Oklahoma State Cowboys and the Baylor Bears, the defending Big 12 champs.

There’s also a legit dark horse looming, which could be worthy of a wager. Let’s dive into these odds, and find you the best bet.

Sooners and Longhorns Not Sure Bets

Oklahoma is the only Big 12 squad in the top 15 of the National Championship odds, and their biggest changes are in the coaching ranks, where Brent Venables takes over for Lincoln Riley.

One of the Sooners’ other high-profile additions is offensive coordinator Jeff Lebby, who comes via Ole Miss and will be tasked with bringing the best out of transfer-QB Dillon Gabriel, who had his best season at UCF with Lebby calling in plays in 2019.

That year, Gabriel completed 59.3% of his passes for a career-best 3,653 yards, tossing 29 TDs to just seven interceptions.

You have to wonder about that defense though: they surrendered 5.93 yards per snap in conference games a year ago and that’s before losing key cogs in Nik Bonitto, Perrion Winfrey and Isaiah Thomas.

OU’s biggest threat on paper are the Longhorns, who have consistently stumbled through “this is the year ” hype.

Last year was much of the same for Texas, a 5-7 finish on the year, and 3-6 in conference play, good for seventh in the 10-team league, which included a trio of losses to Baylor, OU and OSU where they held double-digit leads after halftime.

Optimism abounds, though, with an offensive attack dotted with big-play ability all over the field, starting with the addition of QB Quinn Ewers. He should eventually push Hudson Card out of the starter spot, while superstar Bijan Robinson has things covered at running back. Robinson and Ewers are both top-10 in the latest Heisman Trophy odds.

Receiver Isaiah Nayor and tight end Jahleel Billingsley are both transfers that will add to a unit of pass catchers already sound with Xavier Worthy, Jordan Whittington’s and Ja’Tavion Sanders.

Oklahoma State and Baylor — two finalists in last year’s conference championship tilt — both feature solid squads, though their rosters have seen a lot of turnover.

The Cowboys were an impressive 12-2 in 2021, powered by a defense that returns Brock Martin and Collin Oliver, a duo that racked up 19.5 sacks a year ago. Their secondary is a concern, though, stripped of four starters while tackling machine Malcolm Rodriguez has also moved on to the NFL.

A game of inches 👀@BUFootball comes out on top in the Big 12 Championship Game after coming up with a massive stop on 4th & Goal 🙌🐻 pic.twitter.com/mfHOr93hPw

Even the most ardent Baylor fan is hard pressed to think their squad can go back-to-back after they ended OU’s six-year title run a year ago. Like OSU, the Bears were powered by defense, surrendering just 18.3 points a game and there’s still plenty to like, with nose tackle Siaki Ika and LB Dillon Doyle starring. They also feature an offensive line that should protect Blake Shapen and open up holes for whoever replaces Abram Smith.

The schedule doesn’t do them any favours, however, as they’ll have to travel to Oklahoma and Texas for their head-to-heads this season.

Looking for a long shot? The Kansas State Wildcats might be worth a wager as they bring back a lot of the pieces to a defense that surrendered 21 points a game, with Felix Anudike-Uzomah and Eli Huggins powering a sturdy front seven.

Felix Anudike-Uzomah nearly went to Mizzou “as a regular student” when he didn’t get many scholarship offers. But K-State gave him a chance and now he’s getting national attention for making highlight plays like this

KState was one of only four Big 12 teams to surrender 275 points or less last year, but they were the only one of those squads to not score more than 400 points (358).

They’re hoping Nebraska transfer QB Adrian Martinez breathes some life and tempo onto the offensive side and help open up more space for all-purpose back Deuce Vaughan.