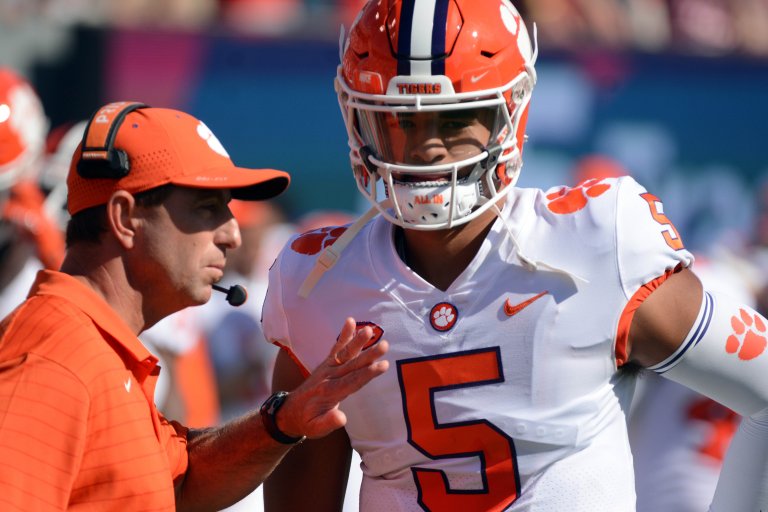 Clemson is a -120 favorite to win the ACC this season
Pittsburgh claimed the title in 2021, ending the Tigers’ six-year reign
Read below for complete odds, plus analysis and bets to target to win the ACC in 2022

For the better part of the last decade, the ACC has belonged to Clemson. That all changed last season when Pittsburgh came out of nowhere to win the conference.

Now the question becomes can the Tigers return to their rightful place among the college football elite? Judging by their current price tag to win the ACC, oddsmakers are certainly bullish on their chances.

Odds as of August 8th at DraftKings Sportsbook.

Clemson is once again the favorite in the college football conference title odds by a wide margin. Miami, fresh off stealing head coach Mario Cristobal from Oregon, boasts the second shortest price, followed by the reigning champs and North Carolina State.

Tigers Poised For Return To the Top

Prior to last season, Clemson had won six straight conference championships. Their run included a pair of National Titles as well as six College Football Playoff appearances. They finished with a 10-3 record in 2021, which was considered an epic failure.

Make no mistake, the defense was not to blame. The Tigers yielded a conference-low 14.8 points per game, which ranked second nationally.

Guess what happens in one month?

We get to play football ?? pic.twitter.com/VDl0RRYiz9

This year’s unit has the potential to be even better than last year’s. All-American hopefuls Bryan Bresee and Myles Murphy are the back bone of a defense that Dabo Swinney believes could see as many as seven defensive linemen drafted. They did lose a pair of all-ACC corners, but more than half of their starters on that side of the ball are returning.

The offense is bringing back half of its starters, including four on the offensive line. DJ Uiagalelei is back under center, this time though with a much shorter leash.

Uiagalelei burst onto the scene in 2020 throwing for 781 yards and 4 TD in two starts in place of an injured Trevor Lawrence. The junior QB’s ceiling is sky high, but as we saw last year, the floor is low. Uiagalelei threw just 9 TD and was picked off 10 times. Clemson’s offense averaged only 26.3 points per game and finished 95th in the country in points per drive.

If Uiagalelei doesn’t flash the form we saw two years ago, we could see 5-star freshman Cade Klubnik. The 18-year-old has been turning heads all offseason and is a threat to steal Uiagalelei’s job during the season, just like Lawrence did to Kelly Bryant in his first season.

Regardless of who’s playing QB, Clemson profiles as the best team on paper in the ACC. Their defense will be one of the best in the nation and we should expect a massive leap from the offense.

They sport the fourth shortest price in the National Championship odds, but that doesn’t mean they’re the only team we should consider to win the ACC.

Wolfpack Will Have Plenty of Bite

Like every year it seems, the Hurricanes are coming in with a lot of buzz. The hiring of Cristobal will help, but we shouldn’t expect them to take a leap until the recruits that he hand picks are in place to make an impact.

The Panthers lost not only star QB Kenny Pickett to the NFL, but also stud wide receiver Jordan Addison to the transfer portal. Addison won college football wide receiver of the year honors in 2021, but chose to continue his collegiate career at USC instead of Pitt. The Panthers also saw their brilliant offensive coordinator Mark Whipple depart, and those holes seem too big to overcome.

Which brings us to North Carolina State. The Wolfpack averaged over 33 points per game a season ago, and is returning an ACC-high 82% of its production from 2021.

Why is no one talking about NC State and Devin Leary? Sneaky pick to win the ACC.

Devin Leary is a star in the making and makes for an intriguing dark horse contender in the Heisman Trophy odds. Leary threw for over 3,400 yards and 35 scores last year, and tossed 4 TDs in four of his last five games. He also chucked 4 TDs versus Clemson earlier in the season, helping the Wolfpack to a double-OT upset victory.

“Good, solid B+ quarterback play from Devin Leary could very well be good enough to win the conference because you know what kind of defense he’s playing with.”@LateKickJosh discusses Devin Leary as one of college football’s most important names going into the 2022 season ✍️ pic.twitter.com/cvixcsfPhy

As good as the offense projects, the defense arguably profiles better. Virtually the entire unit is returning after surrendering just 19 points per contest in 2021. They were 15th nationally in points allowed per drive and top-24 in total yards allowed. That’s the precise recipe of a team I want to be invested in.