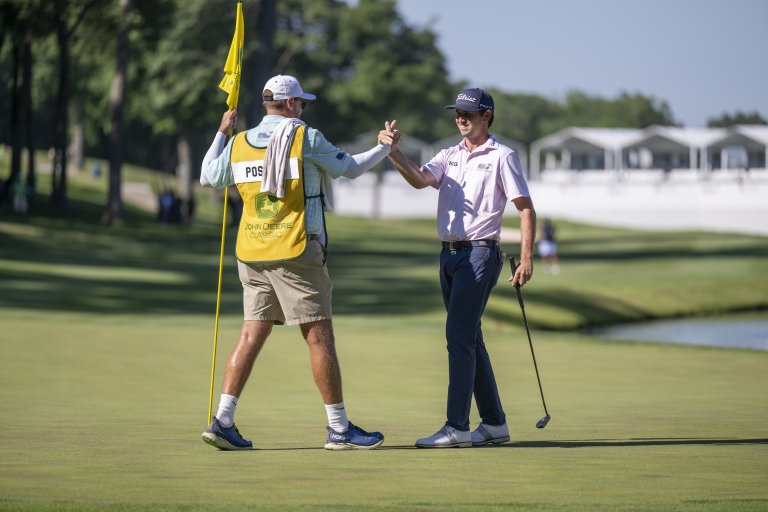 The 3M Open at TPC Twin Cities in Blaine, Minnesota tees off Thursday, July 21st
Tony Finau is the +2200 favorite over Hideki Matsuyama and Sungjae Im to be atop the leaderboard after day one
See the best bets and odds to be the 3M Open first-round leader in the article below

The third-last regular-season event on the PGA Tour calendar heads to Minnesota for the fourth ever instalment of the 3M Open. The field isn’t particularly strong, with Tony Finau the favorite to snag the trophy over Sungjae Im. Finau, Im and Hideki Matsuyama are the only three golfers in the top-25 of the world rankings teeing it up.

With that being the case, there are plenty of opportunities for sleepers and longshots to make some noise at this event at TPC Twin Cities. The three previous champions made this their maiden (Matthew Wolff), second (Michael Thompson) and third (Cameron Champ) titles on the PGA Tour.

Odds as of July 19th at DraftKings Sportsbook.

The forecast calls for it to be mainly sunny throughout the day. Temperatures will be at 70 degrees for those teeing it up first, approaching 80 degrees by noon and high 80’s for those completing their rounds in the early evening. Wind gusts will be pretty similar for all of Thursday between 14 and 20 miles per hour.

Of those who are competing this week, Long has the sixth best opening round scoring average on the PGA Tour.

Long has also had success at this track, as he finished in solo second place in 2020, and then had a respectable T-25 last year. In those two events, he was first in SG: off-the-tee, and second in SG: total, tee-to-green, and ball striking.

J.T. Poston (12:55pm) has been a fixture atop the leaderboard following 18 holes in the last month. He first did it at the Travelers Championship, where he co-led with Rory McIlroy. That event wound up resulting in a tie for second.

Not to be outdone, he did the exact same thing the following week at the John Deere Classic, as he again shot 62 to grab the first round lead. That week, he ended up winning his second tour event in wire-to-wire fashion.

Last year in his tournament debut at the 3M Open, Poston was T-28, where he had three rounds in the 60’s, with just one poor score dooming his chances of earning the title.

Though he cooled off with a missed cut at the Open Championship, it was a pair of 73’s, which isn’t anything to be overly concerned about. With his spectacular play of late, these odds are awfully enticing.

Before last week, Brice Garnett (8:18am) wouldn’t have been on the radar for the 3M Open, considering he’d just come off four straight missed cuts. However, he rebounded from a rut in his play to post a T-16 at the Barracuda Championship, indicating that his game might be turning a corner.

Though he hasn’t seriously contended for the title at this tournament in the three prior iterations, he’s been solid on each occasion, going T-23, T-26, T-16, picking up over a combined 17 shots tee-to-green for those events.

Clearly with the odds being +9000, the expectation is that he won’t wind up with the best opening round score. However, with his solid history around this track, he might just be an incredible longshot.