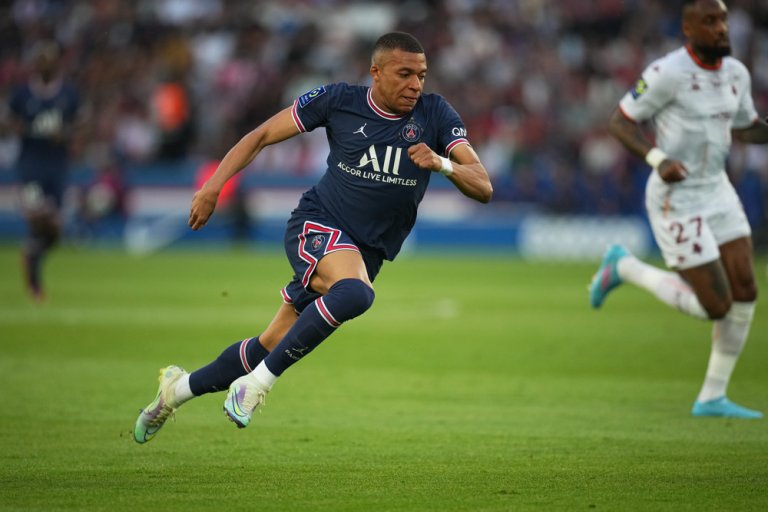 PARIS, FRANCE – MAY 21: Kylian Mbappe (7) is literally flying to the ball during the FC Metz versus Paris Saint-Germain game on May 21, 2022 at Stade Parc des Princes in Paris, France. (Photo by Glenn Gervot/Icon Sportswire)

The 2022-23 Ligue 1 season is set to kick off on Friday, August 5th
Powerhouse Paris Saint-Germain aims for its ninth title in the past 11 seasons, but who will come second?
Read on for a look at all the odds for the Ligue 1 title race, as well as the potential Golden Boot winner

It might not be quite the formality that the German Bundesliga has become over the last 10 years, but Ligue 1 has become something of a procession in its own right, with Paris Saint-Germain winning eight times in the past 10 seasons. There is little reason to believe that the 2022-23 season will be any different either – PSG are currently -1000 favorites in the Ligue 1 odds – which is why we have decided to focus on the race for second place in France.

While not as much of a slam dunk in the goal-scoring futures, Kylian Mbappe, the French international, is the clear favorite to top the goal-scoring charts once again, having finished first or tied for first each of the past four seasons. We’ll take a look at rivals to his crown as well ahead of the Ligue 1 kickoff on Friday, August 5th.

For anyone that thinks we’re being a little premature in awarding the Ligue 1 title to PSG, let’s consider the evidence. In the team’s eight championship-winning seasons in the last 10 years, the average margin of title victory in the league standings has been 14.5 points. In the two seasons Les Parisians missed out, they conceded the 2017 crown to Monaco by eight points and the 2021 laurel to Lille by a single point.

🔟 Championships🏆
Congratulations to @PSG_English for winning the Ligue 1 for the 10th time!

⭐️Partnering with Champions!
Aspetar is proud to be Paris Saint-Germain medical partner.

With Mbappe, Lionel Messi and Neymar all returned to the PSG frontline under new head coach Christophe Galtier – who masterminded that 2021 Lille triumph – it’s hardly a stretch to think they might do it again, particularly after the team looked like it was firing on all cylinders in last weekend’s 4-0 Trophee des Champions victory over Nantes, and that was without Mbappe.

Marseille was always facing a tall order to close the 15-point gap that separated it from Paris last season, and that task has gotten even tougher with the off-season departures of manager Jorge Sampaoli, along with key players William Saliba, Boubacar Kamara and Steve Mandanda.

AS Monaco, who came third last campaign, will have to overcome the loss of Aurelien Tchouameni to Real Madrid. However, the principality club can still rely on the goalscoring prowess of Wissam Ben Yedder, who finished three goals back of Mbappe with 25.

And Lyon underwent something of a retread this summer, bringing back former stars Alexandre Lacazette and Corentin Tolisso in an attempt to break back into the top three after three seasons of missing out.

Mbappe On a Roll

With an average of 26.5 league goals per season over each of the last four years, Mbappe is clearly the striker to fear in France, and his -170 odds of capturing a fifth Golden Boot certainly reflect that.

Playing in a front three beside Messi and Neymar certainly helps in terms of chance creation, but there is a leadership battle to be won there too, particularly for a player who is still just 23 with his best years in front of him.

The return of @KMbappe and the search for balance within the Parisian formation. 🎙️ pic.twitter.com/vZM7JxU8NF

Can Messi Bounce Back?

After scoring just six league goals in 2021-22 – the first time Messi had registered single figures in a campaign since 2005-06 – the obvious question is whether the seven-time Ballon d’Or winner can rediscover his nose for the net in his second season in Paris. His role in the team will go a long way to deciding that however. If it is Messi’s team, then there is no way that he can’t challange the other contenders for the Golden Boot. However, if PSG has decided that the focal point for its attacks will now be Mbappe, then maybe Messi will have more of an assisting role, something he is more than able to perform with ease.

And with the opening goal in last weekend’s Trophee des Champions, Messi looks like he’s out to show that last season was merely an aberration.